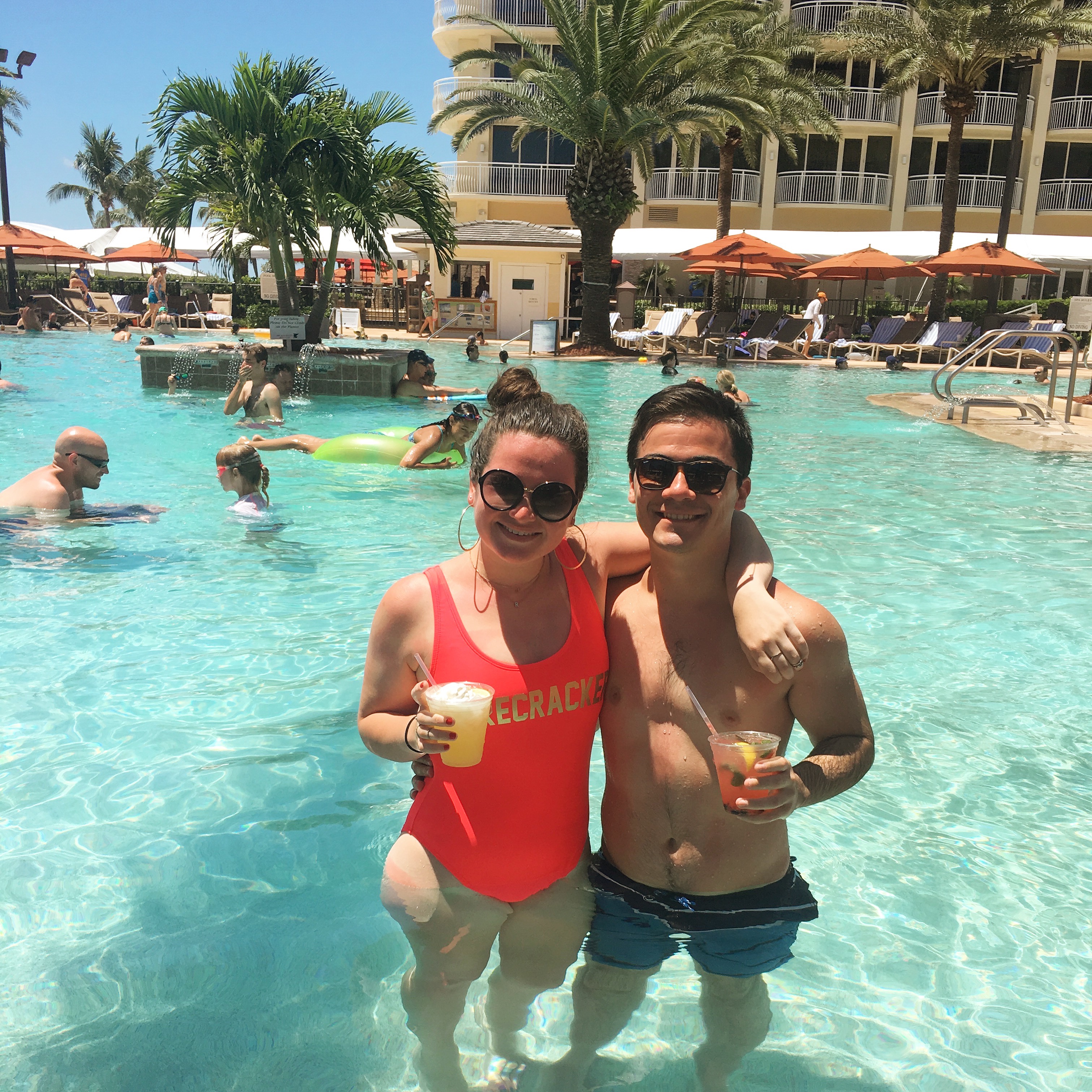 My boyfriend, Ryan, and I just reached the date of our one year anniversary. To celebrate this occasion, we had booked a fancy hotel on Marco Island, down in South Florida. We scheduled this trip back in March, and spent the next four months looking forward to it and counting down. We couldn’t wait to get there, enjoy the beach and celebrate a full year of dating!

Marco Island is exactly four hours from Orlando, so we knew if we wanted to enjoy all three days, we we would need to leave early to get there, and return late on our way home. And that is exactly what we did.

Monday morning we woke up at the crack of dawn and packed the car full of everything we may need. I think it’s safe to say we both extremely overpacked, but hey, where’s the fun in vacation without a full suitcase? The drive down was so much fun. The two of us could be anywhere and have fun, so a road trip early in the morning was no exception. After grabbing our signature Venti (me) and tall (him) iced coffees & plain bagels from Starbucks, we hit the road. For the first two hours we jammed to music (read: Billy Joel) and then the last two we listened to Ryan’s newest obsession podcasts; Serial Killers. It was extremely interesting and also terrifying. I enjoyed listening to it a lot, but I was excited when the podcast ended right as we crossed the bridge onto the island. It was time to take in the views and get really pumped. We were in awe of how nice everything is down there. We passed a million fancy hotels that we joked about staying at instead, and then we finally arrived at our destination. It was beautiful!

Ryan took the car to self parking while I checked us in and then we quickly headed down to the beach. We didn’t want to waste a single moment of the short time we had! So we explored both pools, both bars, then made a decision to stop at one of the latter. It was a cute little tiki hut with a lot of exquisite drinks on the menu. To start off the week we both ordered a $13.25 cocktail. Ryan had been craving a mojito all morning/afternoon so he ordered a fancy coconut flavored one and I ordered a banana-caramel flavored pina colada. We were both wildly happy with our choice. After enjoying some sips, we set off again to explore the hotel and then went down to the beach to inquire about a beach umbrella and chair reservations. Then we went to the pool, and read our books for a while until it got too hot, and then we hopped in the water and swam for around an hour. After that, it was time to go in, since we knew we wanted to have dinner done at a certain time because of the Fire Show.

We went upstairs, took showers, and got dressed. I straightened my hair, did my make up, etc, all while Ryan played on his phone, (boys have it so lucky!!!!) and then we went down to the lobby sushi restaurant for dinner. We split edamame and an amazing roll of sushi that had shrimp, egg, asparagus, spicy mayo, eel sauce, masago, etc. It was delicious. After we paid the bill, we realized we still had an hour until the fire show, so we figured it was the perfect time to go upstairs, and watch the sunset/drink champagne on the balcony. We had brought pineapple flavored champagne with us and we had so much fun enjoying each other’s company on the balcony. After realizing it was 8:13 and the fire show was at 8:22 we hightailed it downstairs and ended up running into some people in the elevator who were also trying to catch the spectacle. We raced the sun as we chased down the sidewalk path leading up to the restaurant and got there just in time. A man dressed in a hula was spinning sticks with fire on them to loud Hawaiian music. It was really cool to watch, and I was very glad we made it a priority to see. Especially, because I knew the next night we wouldn’t be able to see it. After the show was over, Ryan and I explored the beach a bit more, him using my camera to take pictures of the water, the sky, and me.

Once the thunder started rolling, we headed back upstairs and sat on the balcony again watching heat lightning in the distance. It was actually very calming and very cool to experience. After we finally got too bored we decided to go inside and watch Netflix, but because we had split one sushi roll earlier we were starving… so we ended up ordering room service: two grilled cheeses with french fries and large glasses of water. It may not sound like much, but it was EXACTLY what we needed. It completely hit the spot. We ate them while we watched Portlandia and then went to bed around 11pm because we knew we had a long day ahead of us.

The next morning we slept in, but not too late, as we knew we needed to get to the beach to get our umbrella and two chairs. So we got dressed for the beach and then headed down to the hotel’s coffee shop. It was called Illy and it was all local coffee. I got a vanilla latte and Ryan and I split a box of amazing mini donuts. MnM, Key Lime Pie, Vanilla Sprinkle, and Coffee Cake were just some of the flavors. The second we finished we went the beach and got a prime spot for our umbrella. We spent hours there just reading, (well, I read, Ryan looked for shells in the water) and then we finally couldn’t take the heat so we headed to the pool, cooled off in there, and then ordered some lunch. We knew we wanted cocktails, which would probably cost $13 again, so we split a grouper sandwich that came with fruit and fries, and then I ordered an Orange Fusion drink, and Ryan got a Blackberry Lemonade. It was amazing. We ordered another round of drinks, because, #vacation and then we got back in the pool. Then we closed the tab and went back to our beach umbrella for a little bit. There was a actually a golf cart from the restaurant that drove around on the beach, so Ryan got a beer and I ordered a vodka cran with pineapple juice in it. After enjoying the breeze for a little while longer we knew we had to go, because we had a serious 8pm deadline that we had to meet. (The series finale of Pretty Little Liars!)

So we went upstairs, got cleaned up, changed into real people clothes, only this time I didn’t do my hair or makeup, because #vacation, so we enjoyed some red wine on the balcony while the sun set and my hair dried. Then, we called one of the Chinese restaurants on the island that had the best reviews and ordered a TON of food. We hadn’t had a ton of food all day and we were ready to EAT. I spent the rest of the time filling Ryan in about the last seven seasons of Pretty Little Liars so he would be ready for the finale, and then we picked up our food, got cozy in bed, and watched the 2 hour finale of PLL, calling my mom and sister on every single commercial. It was a great night, and I have to give Ryan kudos for being a good sport and watching the entire show with me, AND pretending to be interested in it. I love him so much.

A mix of the sun and adrenaline had worn us out so after the show we got ready for bed and went to sleep. We knew we only had one day left and we wanted to make the most of it. Wednesday morning we woke up and immediately called the front desk to request a late checkout. We would not be all packed and ready to go by 11, especially when we knew we were staying on the beach till at least 4pm. So we hurried, packed, got dressed, said goodbye to our room and then headed downstairs to check out. We paid the bill, left our bags with concierge and then headed out to get our umbrella and two chairs for the last time 🙁 We sat on the beach, enjoyed the breeze and read our books again, but it was H-O-T. We beelined it for the pool faster than last time, and found a perfect spot in the shade to leave everything. We hopped in the water just as quickly and immediately flagged over a waitress to order two more $13 drinks. We spent the next hour or so just enjoying the water, talking about life, and reminiscing on the trip. Our first vacation as a couple (except not really because we’re long distance and do mini vacays all the time) was over. We have been dating for A YEAR! It was crazy. We decided we wanted more drinks, but didn’t want to spend more money so we got our bags from concierge, got the car, and went to a bar on the bay somewhere else on the island where happy hour drinks were $3! We enjoyed our last cocktail and final minutes of vacation bliss, and then we headed home.

However, unbeknownst to us, vacation wasn’t over, because Maps took us a back way home for the entire trip home, and two hours in we ended up on Main Street of some little town and we were starving, so we stopped and dined in at “Giovanni’s Main Street Italian Kitchen.” The second we stepped inside, I was glad we stopped. The vibe was so welcoming and cozy, and the food smelled amazing. There was a brick pizza oven in one corner, and a salad and soup bar in the other. We ordered mozzarella sticks, fresh garlic bread, we each got a salad from the salad bar, I got spaghetti carbonara, and Ryan got lobster ravioli. We had such a great last little “date night” before the trip really really ended. After three days full of beach food and cocktails, some homestyle Italian food really hit the spot.

I had such an amazing vacation and I am so grateful that Ryan and I had the opportunity to go! We are keeping Marco Island in our back pocket for future vacays, and until then, we’ll always have the pics to look back on! 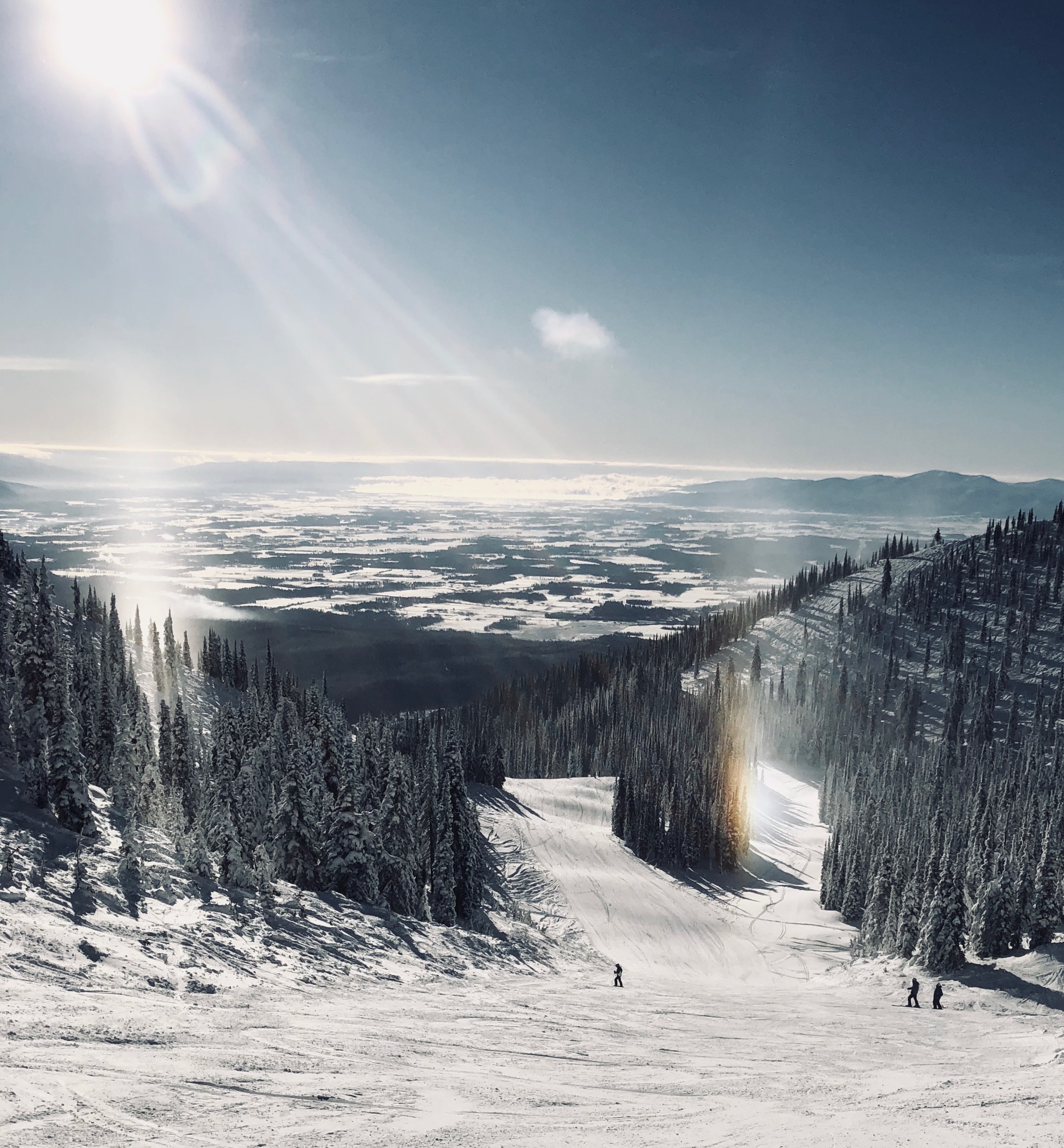 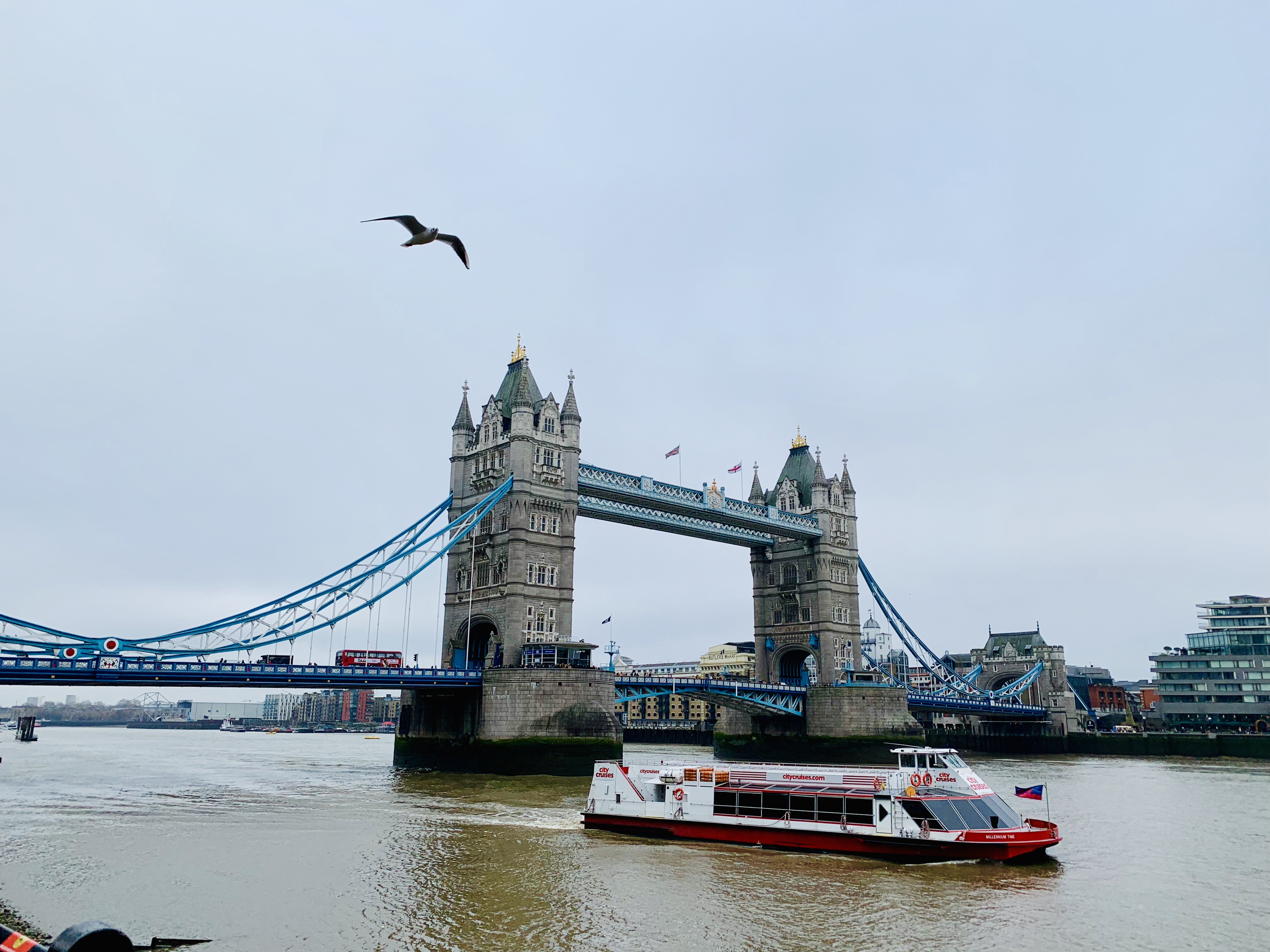 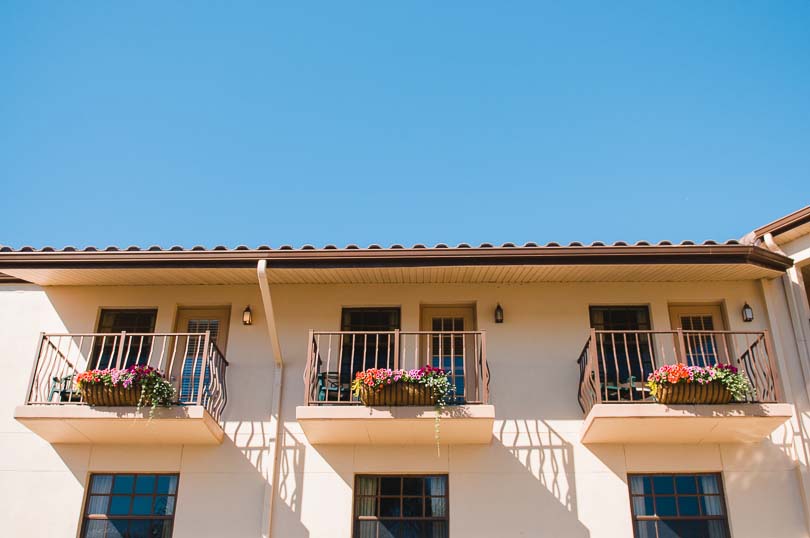 This week was the hottest of NYC’s summer so far

summer in nyc is hot but @narohnayr is hotter 🔥

happy hump day and cheers to a short week 🥂🫶

Still thinking about this dress and the beautiful

Six years ago today, you drove to this house in Lo

went on a little reading and puppy playdate yester

This past weekend two of my favorite people (and f